Spalled Bricks & the use of Lime

In this example spalled bricks refers to surfaces of bricks being damaged by improper pointing. It is a broad subject and there have been many books written about the correct use of Lime and repair of older buildings but below should serve as an introduction to the subject.

As the use of lime in construction declined this became more of a common sight. Lime was traditionally used as a principle element of mortars, renders and plasters in conjunction with brick, stone and earth. It formed a bond between these elements but crucially it was soft enough to allow small movement and porous enough to allow the evaporation of moisture.

Modern cement sets much harder and is on the whole, impervious to the passage of moisture. It does not accommodate movement well. 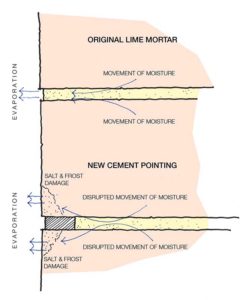 Where an old (in this example, brick) wall has been constructed with lime mortar, part of the drying out process after persistent wetting (the winter for example) is evaporation. The hand made bricks and lime mortar have a level of porosity and absorb some moisture during heavy rain. This would slowly be evaporated off the wall, with most of the moisture evaporating from the open-structure of the lime mortar.

If the building has been re-pointed with modern, hard, impervious cement mortar, then this ‘plugs’ this gap and the moisture starts to evaporate from the brick surfaces. Not only is this slower, causing damp to linger, but it deposits salts in the brick, causing subsequent decay. Frost action on this moisture can crack and disintegrate the brick surface.

The original lime pointing is considered sacrificial and as this decays over time (but still quite a long time) is easy enough to repoint, keeping the bricks intact and free from damage. When replaced with cement, the pointing is as hard as or harder than the bricks, leading to a change in moisture movement and damage.

There are many places in older buildings where the use of cement can cause significant damage, Cement render for example keeps most of the rain off, but if cracked (likely as older buildings move and cement is intolerant to movement) then moisture will get in, but not out. Impervious coatings will also prevent solid walls from having a large surface area to evaporate off and you may find internal damp conditions become worse as all the moisture has to evaporate internally. Putting a non-breathable render like cement over a cob wall will eventually lead to collapse as the moisture levels build up and effectively turn the hard dried cob back into wet mud, no longer able to take compression loads.

Below are two images showing some pretty bad cement pointing on an old historic soft Heavitree stone wall. Not only does it look terrible, but you can see how the surface of the stone has become pitted and over time is falling away in small pieces leaving the cement standing proud.

This is a particularly bad example as the stone is quite soft, and the only remedial approach is to chip the cement off, which unfortunately will damage the stone further.

There is a huge amount of information available, and the SPAB offer very decent advice and are a good starting point. Any work that is advertised as a ‘miracle’ cure or offers modern solutions to historic buildings should generally be avoided as it is generally coming from a mis-educated source. There are few solutions except patience and traditional, often slower, methods that are suitable for the long term upkeep of older buildings.

Old buildings on the whole will work very well if allowed to function as they were intended. Permeability of moisture and ventilation to carry the moisture away are absolutely key to their survival. Sealing in gaps and draughts, covering up surfaces and use of modern methods, membranes and materials are to be taken in caution and only with very considered holistic thought.