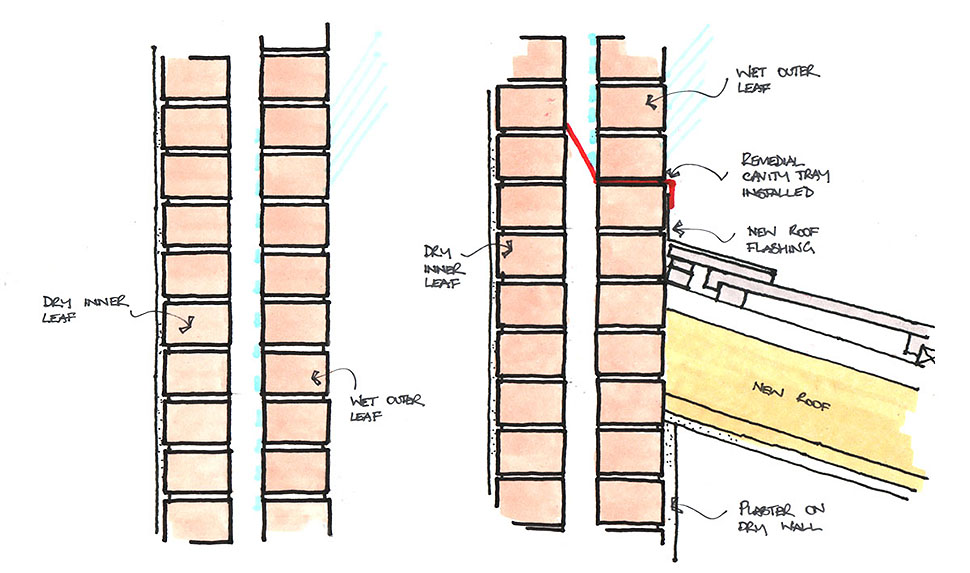 A cavity tray is a barrier to water or moisture (usually formed of plastic) in a cavity wall. It slopes down and outwards crossing the cavity to protect whatever is below from any water that is running down the cavity. Today, preformed plastic ‘trays’ can be installed, however plastic damp proof courses (dpc) can be draped on-site effectively. Cavity trays can be found in all areas of cavity construction, above windows, openings, roof abutments and wall penetrations. Brick walls that have two layers of brick with an air gap between are called cavity walls. They have been common since Edwardian houses and can be found as early as late Victorian houses too. The gap between the two leaves of the wall act like a flysheet on a tent, the outer layer shedding almost all of the water, leaving the inner leaf dry (most of the time!).

Under very heavy rain or constant wetting, or if cracks and leaks occur, water droplets can find their way to the inside face of the outer layer of bricks. Droplets and drips will then run down the cavity until they reach an obstacle such as a lower window or the floor. This is designed to be so, so when the outer leaf can no longer keep the rain out, the air gap prevents water reaching the inside wall. It is important that anything that bridges the cavity free-drains towards the outside. On newer buildings a cavity tray is installed above windows and doors, and small drain holes allow caught water to exit the cavity, called ‘weep holes’.

If you are planning to install a lean-to extension against the side of a cavity wall you can imagine that the outer brick leaf becomes internal once within the lean-to. Should water find it’s way into the cavity, it will then travel to the inside of the house unchecked. This is where remedial cavity trays come in. Small sections of brick are taken out a couple at a time above where the new roof is to be installed. A pre-formed dpc with a folded flap to bridge the cavity is inserted. The flap presses against the inner leaf, sloping down to the outside to weep holes. The bricks are put back in on top, and the next adjacent couple of bricks are removed to repeat until the whole roof line is protected. It is not as robust a solution as if a fully coursed cavity tray was installed, if both wall and roof were built at the same time, but it is a very good compromise and goes a long way to protect your new walls. They can seem tricky to install at first, but are a vital tool to keep the new lean-to extension dry.